In recent decades, more and more local and foreign investors have been looking for gold in Serbia. The research performed by two Canadian companies showed that there were very profitable sites.

CERTIFICATES AWARDED TO THE STUDENTS OF THE SERBIAN LANGUAGE SCHOOL 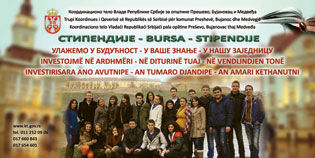 You are kindly asked to provide media coverage of the award of certificates to the second generation of students of the Serbian Language School at 11 am on Wednesday, June 25, 2014. The event will take place at the small hall of the cultural center in Bujanovac.

On the occasion of marking the Refugee Day in Bujanovac, 15 families of internally displaced persons (IDPs), who used to be accommodated in collective centers in the area of the municipality, as well as five domicile, socially disadvantaged families, received the keys to new apartments.

Zoran Stankovic, the President of the Coordination Body for the Municipalities of Presevo, Bujanovac and Medvedja urged political leaders of the ethnic Albanians from these municipalities to resume dialogue with the Government of Serbia and thus resolve the current issues.

TAKING OF THE PRIMARY SCHOOL LEAVING EXAM IN PROGRESS

Eight-graders in Serbia began taking a test in the Serbian (native) language yesterday. The testing will last for three days. According to the department of the Ministry of Education, the final exam will be taken by 2, 385 primary school students of the Pcinj district.  Persons belonging to national minorities, rather than a test in Serbian, will take a test in the Albanian, Romanian, Ruthenian, Slovak, Hungarian, Croatian or Bulgarian languages.

As part of the "Serbia against Cancer" project, a mobile mammography unit reached Pcinj district yesterday, where it should assist with the early detection of breast cancer in women from South Serbia.

Bujanovac – The Regional Chamber of Commerce in Leskovac recently opened an office in Bujanovac, the aim of which is to enable better contacts between businessmen of this area with businessmen in the region, as well as to assist them with solving the issues related to the development of their companies.

ROMA BELIEVE THAT THE POLICE DON’T PERCEIVE THEM AS CITIZENS

The Project of the Center for Public Policy Research "Male and Female Roma and Security Sector Reform" was carried out in six cities and municipalities in Serbia, which include Nis, Vranje, Bujanovac, Kragujevac, Subotica and Zemun.